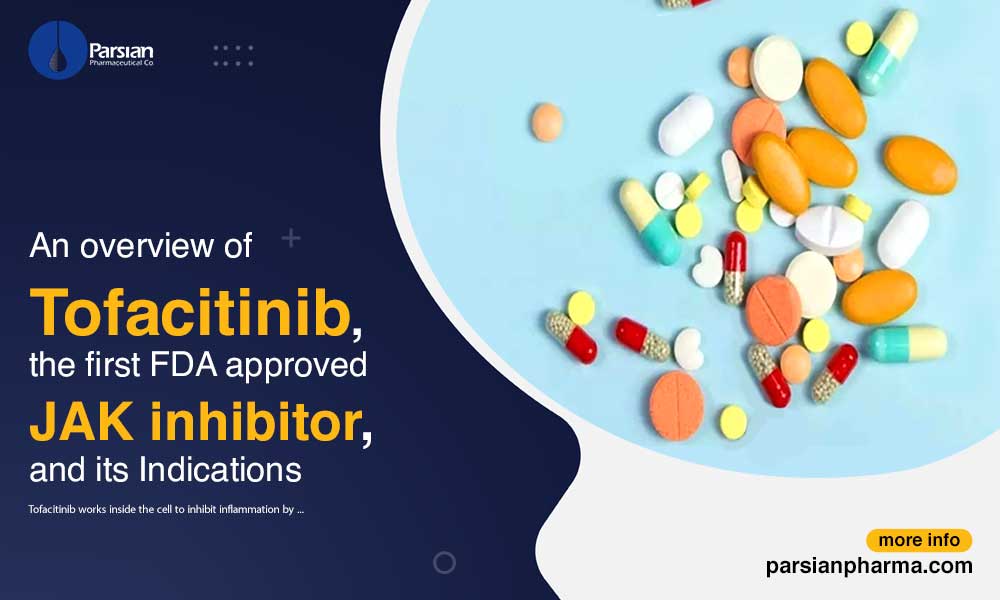 An overview of Tofacitinib, the first FDA approved JAK inhibitor, and its Indications

Tofacitinib is a type of drug known as Janus kinase JAK inhibitor. Tofacitinib is a small molecule, not a protein; therefore, causing the formation of neutralizing anti-drug antibodies related to therapeutic proteins, and immunogenicity is not expected to occur. It works by blocking the action of Janus kinase enzymes, which are involved in the inflammation. Tofacitinib is a long-term treatment. Most patients who benefit from this treatment will see an improvement within the first twelve weeks of starting treatment. Tofacitinib works inside the cell to inhibit inflammation by blocking JAK-dependent signaling pathways and production of many inflammatory cytokines.

Tofacitinib works by decreasing a substance called cytokines. Cytokines are a protein in the body, which helps control the immune system. When there is an infection, cytokines increase to help fight the infection. Patients with immune-mediated inflammatory diseases make more cytokines than necessary, and this leads to inflammation and pain. Tofacitinib disrupts cell signals in the JAK pathways to reduce the production of new cytokines. In people with psoriatic arthritis and ulcerative colitis, the drug works the same way to lower inflammation that causes symptoms.

Tofacitinib was the first small molecule JAK inhibitor tested in clinical trials for treatment of immune mediated inflammatory diseases. Tofacitinib exerts its mechanism of action by inhibiting intracellular cytoplasmic non-receptor tyrosine kinase JAK enzymes, which are involved in adaptive and innate immune reactions in the process of immune-mediated inflammatory diseases.  Tofacitinib is a reversible and competitive JAK inhibitor that binds to the ATP binding site of the kinase domain of JAK. It is similar in structure to ATP and binds to the ATP-binding site of JAK, thus competing with ATP for binding to the active site of the kinase domain. As a result, the drug inhibits the phosphorylation and activation of JAK, thereby preventing the phosphorylation and activation of STATs, and thus the activation of gene transcription; this leads to decreased cytokine production and modulation of the immune response. Tofacitinib is a pan-JAK inhibitor but targets JAK1 and JAK3 with a higher specificity over JAK2 and TYK2. Tofacitinib has a 1000-fold selectivity in inhibiting JAKs against other non-JAK kinases.

Janus kinases are phosphotransferases, and receptor engagement by cytokines activates their enzymatic function. JAK inhibitors represent a new strategy for the treatment of immune and inflammatory diseases. Tofacitinib is a targeted synthetic small molecule which is available in oral formulations; it was first FDA-approved in April 2012. It is the most prescribed JAK inhibitor, and has been prescribed for more than 9 years since initial RA approval in 2012.

Tofacitinib is approved for adults with moderate to severe RA when one or more TNF (tumor necrosis factor) blockers did not work well or cannot be tolerated. It can be used in sequence with first-line therapy methotrexate (MTX) or conventional DMARDS or can also be used as monotherapy for RA.

Tofacitinib is approved for adults with active psoriatic arthritis when one or more TNF blockers did not work well enough or cannot be tolerated.

Tofacitinib is the first pill of its kind JAK inhibitor approved for adults with moderate to severe ulcerative colitis when one or more TNF blockers did not work well or cannot be tolerated.

Tofacitinib is approved to be used for treatment of active ankylosing spondylitis in adult patients who have tried TNF blockers, but they didn’t work well enough.

Benefits over other traditional treatments:

Six studies in over 4,200 patients with RA have shown that tofacitinib is effective at reducing joint swelling, pain and damage and improving joint movement. Most patients in these studies had tried other treatments before, and most took tofacitinib with methotrexate.

Tofacitinib, in combination with methotrexate, was shown to be effective at improving symptoms of psoriatic arthritis in two main studies.

In the first study, symptoms improved substantially in 50 and 52% of patients taking tofacitinib and adalimumab, respectively, for three months, compared with 33% of those receiving placebo; patients taking tofacitinib or adalimumab also showed a greater improvement in their ability to perform everyday activities. Similarly, in the second study, tofacitinib was more effective than placebo at improving symptoms (50% of tofacitinib-treated patients versus 24% of those given placebo) and ability to perform everyday activities. 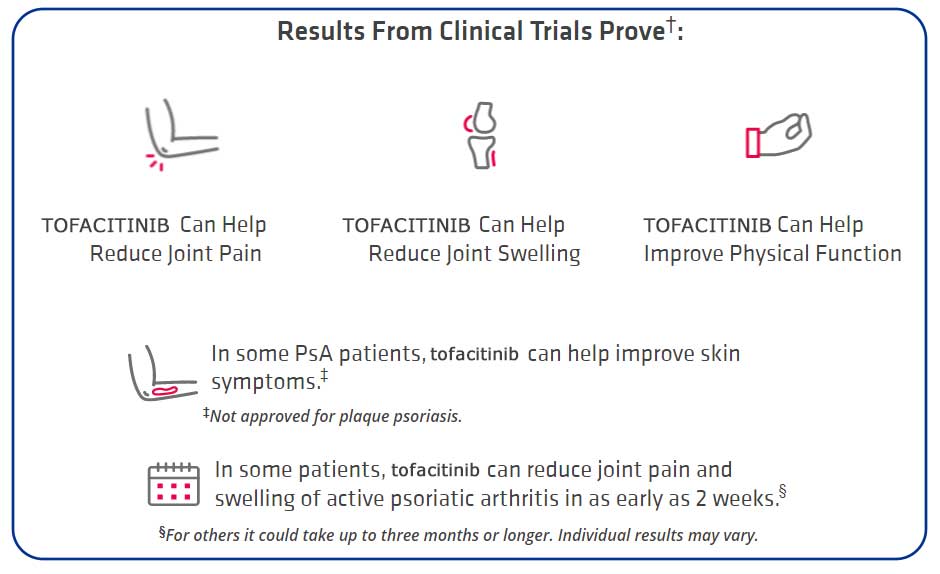 Tofacitinib was more effective than placebo at reducing symptoms of juvenile idiopathic arthritis both in combination with methotrexate and alone. The study compared disease flare-ups between patients treated with tofacitinib or placebo.

In the study involving 173 patients between 2 and 17 years old with juvenile idiopathic arthritis, 28% of the patients who received tofacitinib experienced flare-ups after 26 weeks compared with 53% of those who received placebo.

Tofacitinib was more effective than placebo at reducing the symptoms of ulcerative colitis in three main studies.

Tofacitinib was more effective than placebo at reducing symptoms of ankylosing spondylitis in one study involving patients that had not responded well enough to previous treatment. The main measure of effectiveness was a 20% reduction in ASDAS (Ankylosing Spondylitis Disease Activity Scores) criteria including; back pain, morning stiffness and other symptoms, after 16 weeks of treatment.

In this study, involving 269 patients, ASAS criteria were satisfactorily reduced in around 56% of patients who received tofacitinib, compared with some 29% of those who received placebo. Additionally, around 41% of patients treated with tofacitinib had a 40% reduction in ASAS scores, versus about 13% of patients on placebo.

Tofacitinib is the first and the most prescribed JAK inhibitors; According to the above mentioned benefits, Parsian Pharmaceutical Company has been focused on manufacturing of this medicine as a novel way for treatment of immune-mediated inflammatory diseases