Review over Amyotrophic Lateral Sclerosis (ALS) and the First FDA-Approved Drug for Treatment of ALS: 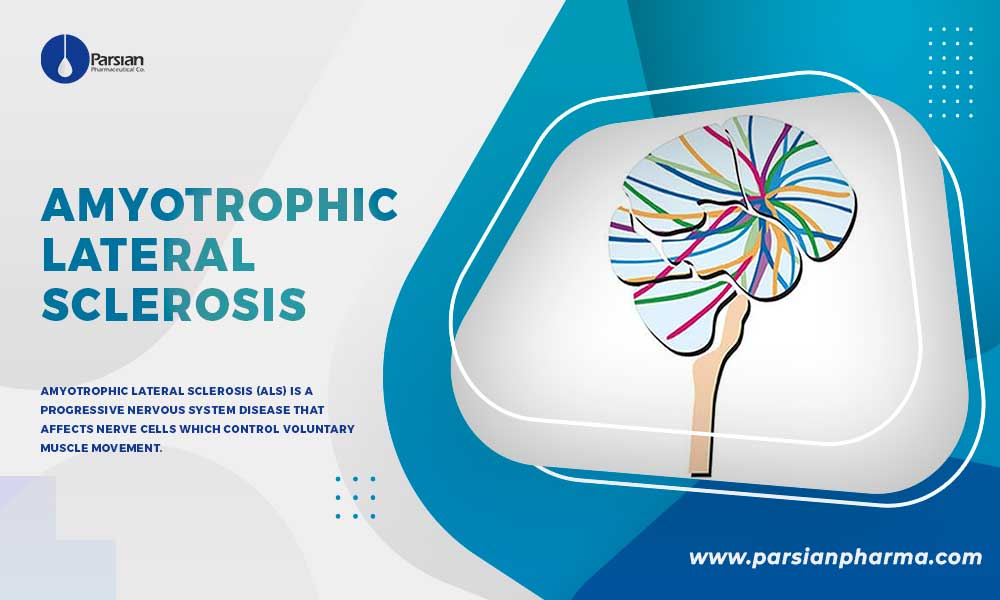 Amyotrophic lateral sclerosis (ALS) is a progressive nervous system disease that affects nerve cells which control voluntary muscle movement. Patient’s sensory functions or mental faculties doesn’t changed through ALS. ALS is considered as a progressive disease. There is no cure for ALS and no effective treatment option to stop or reverse the progression of the disease. ALS can becomes apparent in various patterns, which makes it to be kwon as syndrome. ALS is belonged to a wider group, known as motor neuron diseases, which are caused by gradual degeneration and death of motor neurons. Motor neurons are extended from the brain to the spinal cord and to muscles throughout the body. ALS makes neurons degenerated, which leads to stop sending messages to the muscles; and the muscles gradually start to twitch and waste away (atrophy). In ALS, brain loses its ability to initiate and control voluntary movements. Early sign of ALS is weakness or stiffness of the muscles, gradually all voluntary muscles get affected, and patients lose their strength; and the ability to eat, speak, move, and even breathe. ALS is fatal, and the average life expectancy after developing it is 2to 5 years, but some patients may have a chance to live for years or even decades. Most of the ALS patients die from respiratory problem, usually within three to five years from when the symptoms first appear; however, about 10 percent of patients survive for ten or more years.

ALS was once commonly known as Lou Gehrig’s disease, after the baseball player who was diagnosed with it.

Many patients with ALS can live longer and more productive because of current research into the prevention, cause, and cure for the disease. Half of affected patients live at least 3 or more years after diagnosis; 20 percent live 5 years or more; and up to 10 percent will survive more than 10 years.

The cause of Amyotrophic lateral sclerosis (ALS) is not known, and scientists do not still know why ALS strikes some people and not others. However, scientific evidence suggests that both environment and genetics have a role in motor neuron degeneration and developing of ALS.

While ALS can affect anyone, anywhere, at any time, there are two different ways cases are categorized

Most of the cases of ALS are considered sporadic. This means the disease can occur at random with no clearly associated risk factors and no family history. Although family members of patients with sporadic ALS are at an increased risk, the overall risk is very low and most will not develop ALS.

About five to ten percent of all ALS cases are familial, which means that an individual inherits the disease from a parent. The familial form of ALS usually only requires one parent to carry the disease-causing gene. Mutations in more than a dozen genes have been found to cause familial ALS.

On June 1, 2021, scientists have discovered a unique form of genetic ALS that affects children as early as age 4 years.  This childhood form of ALS is linked to the gene SPTLC1, which is part of the body’s fat production system, and may be caused by changes in the way the body metabolizes fatty materials called lipids. 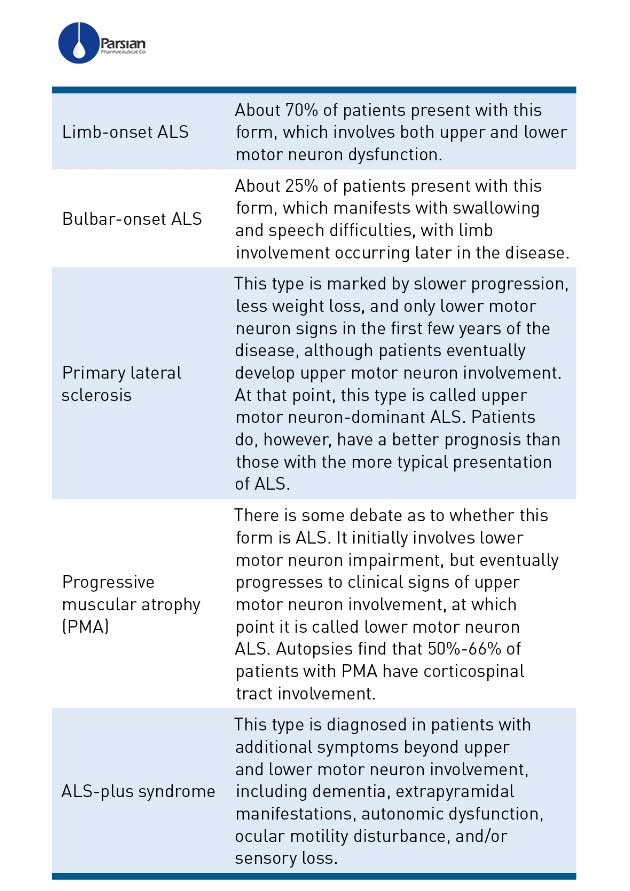 There are two FDA approved medicines for treatment of ALS, edaravone and riluzole. Parsian pharmaceutical Co. is producing the API of Riluzole, which is a treatment of ALS that can help to slow down the worsening of the disease and prolong survival.

Riluzole is a glutamate antagonist, which was approved in 1995 as the first treatment for ALS. It works by inhibiting the activity of glutamate, one of the chemical messengers that transmit signals between neurons. The elevated levels of glutamate in ALS is toxic to neurons. Although it is not a curative option, it has been shown to prolong survival and slow the progression of the disease.

This approval was based on demonstrating data which shown survival benefits.  Riluzole exerts an inhibitory effect on glutamate release, and inactivating sodium channels and interfering with downstream events resulting from transmitter binding at excitatory amino acid receptors. Based on guidelines from American Academy of Neurology (AAN), it is recommended to start riluzole upon diagnosis. Riluzole is available in oral and liquid dosage forms. The effect of riluzole on mortality has been evaluated, which demonstrated a significantly higher 12-month survival compared with placebo, with an even greater benefit for patients with bulbar-onset disease. One-year survival in patients with limb-onset disease was 74% compared with 64% in patients receiving placebo. It also can slow muscle strength deterioration. The common associated side effects were, spasticity, dizziness, and liver-function changes. Riluzole also has demonstrated benefits of survival without tracheostomy in patients with fewer than 5 years of probable or clinically diagnosed ALS.

Patients with early diagnosis can benefit in critical ways, including extended survival time, improved quality of life, reduced healthcare costs, increased efficacy of prescription drugs, and added and maintained eligibility for insurance coverage of prescription drugs. Focusing on the drug-related aspects, the efficacy of riluzole appears to be greater when therapy is started in the earlier stages of disease, which has prompted some clinicians to consider prescribing the drug before a definitive diagnosis.

Prior Authorization for starting Riluzole

The prior authorization criteria for riluzole is just the requirements of a diagnosis of confirmed or probable ALS and that the prescription is being prescribed by or in consultation with a neurologist. The prior authorization requirements that restrict treatment to early stage ALS emphasize the importance of early diagnosis. One of the primary benefits of riluzole is that its use appears to extend the time to some medical services, particularly tracheostomy. The resulting delay in time to tracheostomy can help reduce overall healthcare costs.

Hence, one of Parsian’s fields of activity is research and development in ALS to manufacture active pharmaceutical ingredients (API) of Riluzole, to help patients who are battling with ALS to have fewer concerns.

There is more information about “Riluzole” in our list of product for ALS.