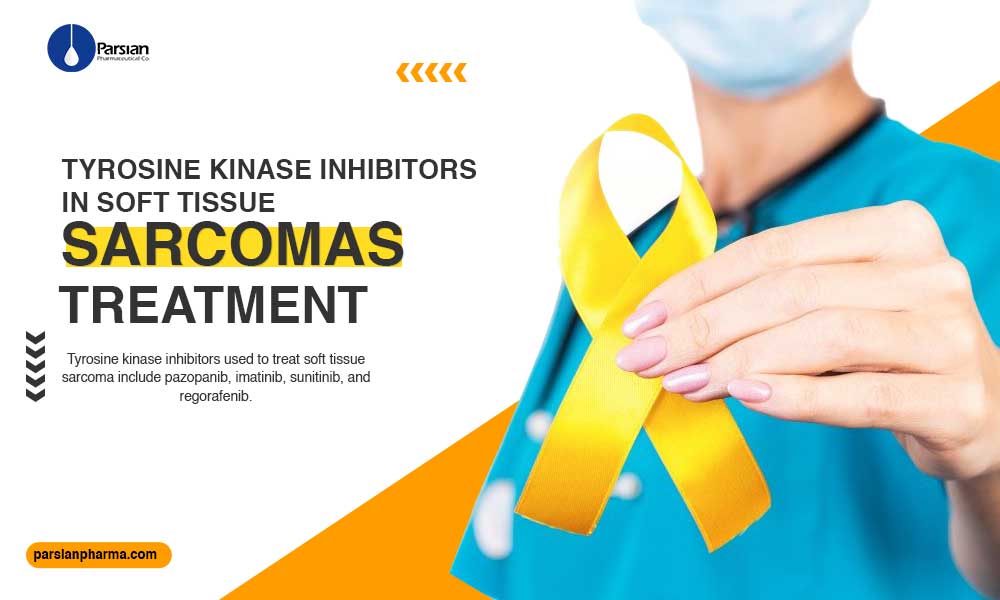 Sarcomas are a group of rare mesenchymal malignant cancers which arise from transformed cells of the mesenchymal connective tissue, and are challenging to be treated. The majority of sarcomas are soft tissue sarcomas (STSs; 75%) and this heterogeneous group of tumors is further comprised of gastrointestinal stromal tumors (~15%) and bone sarcomas (10%). Although surgery is the current primary therapeutic choice for localized disease, recurrent, metastatic and refractory sarcomas need cytotoxic chemotherapy, which usually has poor results. So the efficiency of sarcoma treatment imposes a difficult problem. Even though progress has been made towards understanding the underlying molecular signaling pathways of sarcoma, there are limited treatment approaches. The aim of the present study was therefore to perform a review of the tyrosine kinase inhibitors (TKIs) which are being used in patients with recurrent or refractory STSs over the last two decades.

Tyrosine kinases are important elements of several intracellular molecular signaling pathways. Deregulation of them has been implicated in driving oncogenesis via the crosstalk of pivotal cellular signaling pathways and cascades. Small molecule TKIs targeting these proteins provide a novel potential therapeutic approach for several types of tumor with offering significant clinical benefits. 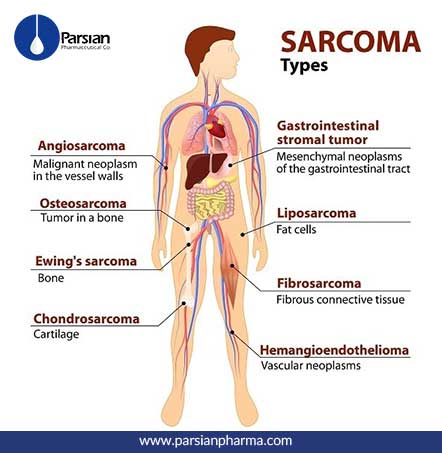 The majority of sarcomas arise from soft tissue (75%), followed by gastrointestinal stromal tumors (GISTs; ~15%) and bone sarcomas (10%). STSs are classified into 120 histological groups. Moreover, a recent World Health Organization classification described an even greater number of molecular subsets, comprising of a heterogeneous group of tumors with rare and ultra-rare subcategories of STSs. Liposarcoma and leiomyosarcoma are the most common histological types, with an incidence of less than 1 case in 100,000 individuals/year that highlights the rarity of sarcomas.

Bone sarcomas are with distinct patterns of incidence, with no more than 0.3 cases in 100,000 individuals per year for each bone sarcoma subtype. Osteosarcoma (OST) and Ewing sarcoma (ES) are most common in young people, with a high incidence rate among individuals <20 years old, whereas chondrosarcoma (CS) is more common in older adults. Extremities and trunk areas are the most common locations for the majority of bone sarcomas and approximately half of STSs. However, both bone and STSs can also develop in the head and neck, retroperitoneum, gastrointestinal tract and genitourinary tract.

A multidisciplinary approach is strongly recommended for sarcoma treatment due to the rarity and heterogeneity of bone sarcomas and STSs. Complete surgical resection remains the treatment of choice in regimens with curative intent. Cytotoxic chemotherapy is the backbone of the systemic treatment approach, but the discovery of various molecular signaling pathways implicated in sarcomagenesis has paved the way for targeted therapeutics. The targeting of tyrosine kinases is currently studied in clinical trials but this approach has also been used in clinical practice.

The aim of the present systematic review was to discuss the role of TKIs in the treatment of patients with locally advanced, unresectable, or metastatic STSs.

Targeted therapy is a type of treatment that uses drugs or other substances to identify and attack specific cancer cells. Targeted therapy may cause less harm to normal cells than chemotherapy or radiation therapy do. There are different types of targeted therapy. These include:

Pazopanib, a multi-targeted angiogenesis inhibitor, is the first and only tyrosine kinase inhibitor currently approved for the treatment of multiple histological subtypes of soft tissue sarcoma (STS). Initially developed as a small molecule inhibitor of vascular endothelial growth factor receptors, preclinical work indicates that pazopanib exerts an anticancer effect through the inhibition of both angiogenic and oncogenic signaling pathways.

Tyrosine kinase inhibitors (TKIs) targeting angiogenesis A variety of TKIs exert their antitumor effect by targeting angiogenesis. Pazopanib, a TKI targeting VEGFR 1– 3, PDGFRA, PDGFRB and KIT, was tested in advanced, pre-treated STS patients, and showed an improvement in PFS of 3 months compared to placebo; a good performance status and a low or intermediate tumor grade were selected as favorable prognostic factors. Liposarcomas were excluded from the study based on the negative results reported in a previous phase 2 study for this histology. The results of the PALETTE study led to pazopanib approval in advanced, refractory non-lipomatous sarcoma. Although the mechanism of action is still poorly understood, pazopanib seems to be more active in leiomyosarcoma, synovial sarcoma, vascular sarcomas (epithelioid hemangioendothelioma and intimal sarcoma), alveolar soft part sarcoma (ASPS) and solitary fibrous tumor (SFT).

Adding pazopanib to the pre-surgery regimen

For most people with advanced soft tissue sarcoma, standard treatment includes radiation therapy and possibly chemotherapy before surgery to remove the tumor. The goal is to kill as much of the tumor as possible before operating, which can help the surgeon get all or most of the tumor out safely and kill cancer cells that may have escaped from the original tumor.

Now, early results of a clinical trial show that for children and adults with advanced soft tissue sarcoma, adding the targeted drug pazopanib to chemotherapy and radiation treatment is safe and increases the chances that most of the tumor will be dead before surgery.

Surgery to Remove Larger Tumors Can Be Risky

Soft tissue sarcoma is a group of about 100 different types of cancer that form in the soft tissues of the body, including tendons, muscle, lymph vessels, and tissue near joints.

These cancers account for less than 1% of all new cancer cases diagnosed each year.

Usually, surgeons aim to remove a tumor completely, along with 1–2 centimeters of normal tissue near it, to make sure they’ve got everything. But if it can’t be done safely, the next best thing is to make sure that the edge of the tumor id behind has been dead… and hopefully won’t be able to spread or cause the cancer to come back.

The new study involved cases with tumors which were large and aggressive and initially not good candidates for surgery; in some cases, the cancer had spread, or metastasized, from the site of the original tumor.

Pazopanib, which is taken orally, is FDA-approved in adults with soft tissue sarcoma who have received chemotherapy. “But at the time of this study, there were no evidence whether it was safe to combine pazopanib with other more traditional therapy used” for either adults or children.

Participants underwent surgery 13 weeks after treatment began. Pathologist examined the removed tumor tissue under a microscope to determine the percentage of tumor cells that were dead after treatment, which is the pathological response.

The study was designed to compare the percentage of patients in each treatment group that had a pathological near complete response, which was defined as at least 90% of the tumor being dead at the time of surgery. The result was: pazopanib and chemoradiotherapy was more effective than chemoradiotherapy alone.

About 58% in the pazopanib group vs 22% in the control group had a pathological near complete response. One of the most exciting results of the study, “is that adding pazopanib to standard chemotherapy was feasible from a safety and side-effect perspective.”

Gastrointestinal Stromal Tumor is a type of soft tissue sarcoma that often begins in the abdomen.
By contrast with the other subtypes of soft-tissue sarcoma, three KIT-targeted agents, including imatinib, sunitinib, and regorafenib, have been approved for advanced GIST that is driven by PDGFRA and KIT  mutations, and the prognosis of patients with GIST has improved greatly.

Imatinib is indicated for being used to treat a type of soft tissue sarcoma called a gastrointestinal stromal tumor (GIST). It is a type of targeted drug called a tyrosine kinase inhibitor (TKI).

Some GIST patients are associated with a higher risk of their cancer coming back after surgery. This is called a high risk GIST. Imatinib help reducing the chances of the GIST coming back. So in this situation, you may be recommend to take imatinib for up to 3 years after operation.

Imatinib may also be started to shrink a GIST before surgery so that your surgeon can remove it more easily. Sometimes a GIST can completely be removed after treatment with imatinib.

Imatinib may also be used to treat a very rare, low grade type of sarcoma called a dermatofibrosarcoma protruberans (DFSP), which is developed in the skin.

Today, the gold standard in all types of sarcomas is surgery, because different types of sarcomas are refractory to chemotherapy and radiotherapy. In GIST molecular targeted therapy offer a new paradigm in approaching this disease. However, the principal treatment in GIST is surgery, and imatinib or sunitinib are alternatives in patients in whom the disease has spread. Now sunitinib is the second line treatment with failure of imatinib therapy.

Sunitinib was FDA approved in the management of advanced GIST in 2006.

Your doctor might recommend that you have sunitinib in one of the following situations:

You must have GIST which can’t be completely removed or has spread.

Regorafenib is another multi-targeted kinase inhibitor that targets a number of pathways involved in tumor growth including tumor angiogenesis, oncogenesis , and the tumor microenvironment; and it is taken orally. In 2013, the FDA approved regorafenib for use in the patients with advanced GIST refractory to imatinib and sunitinib.

Regorafenib is used to treat advanced GIST. Like the above drugs, it is a tyrosine kinase inhibitor. Regorafenib can be recommended if you have had treatment with imatinib and sunitinib and these drugs:

Advanced GIST is when patient can’t have surgery to remove the GIST, or it has spread. You must be fairly fit and well to have this drug.

There is more information about GIST in our recent article.

The intracellular tyrosine kinase c-SRC pathway, including as downstream targets EGFR, PDGFR and c-KIT, has been reported to be up-regulated in STS, especially synovial sarcoma and leiomyosarcoma. Additionally, the hepatocyte growth factor receptor (MET) and anaplastic lymphoma kinase (ALK) are TK-receptors, whose disruption promotes cellular proliferation, angiogenesis and disease spreading in many solid cancers, including STS. Crizotinib, a TKI targeting both ALK and MET, has shown activity in ALK-rearranged inflammatory miofibroblastic tumors (IMTs), which account for approximately 50% of all IMT cases. Also crizotinib achieved an ORR of 66.7% in ALKpositive IMT, and Crizotinib can be considered for approval in advanced ALK-positive IMT.

Although surgery is the current primary therapeutic approach for localized disease, recurrent, metastatic and refractory sarcomas require cytotoxic chemotherapy, which usually yields poor results. Therefore the efficiency of sarcoma treatment has a difficult problem. By understanding the underlying molecular signaling pathways of sarcoma, targeted therapies can be an interesting options for being used in different subtypes of sarcomas.

Parsian pharmaceutical Co. has all of these effective medicines in its wide varieties of list of products, you can find more information and other approved indication of them in our list of products and highlights, in our website.