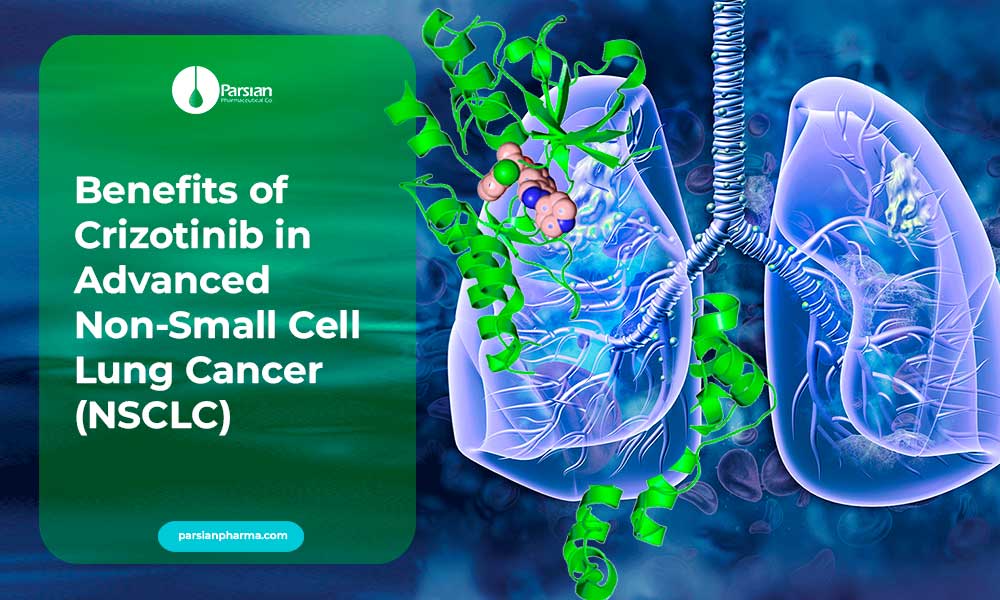 Non-small-cell lung cancer has poor prognosis and low survival rates, providing a strong rationale for the development of new treatment strategies. Advanced non-small cell lung cancer (NSCLC) Patients have few effective treatment options, only about a third of these patients experience tumor shrinkage with standard chemotherapy. The discovery of ALK and ROS1 rearrangements and development of crizotinib provided a personalized treatment option for patients with advanced ALK and ROS1 positive NSCLC.

Initially was developed as a MET inhibitor, crizotinib had activity in anaplastic lymphoma kinase (ALK) fusions and ROS1 rearrangements. ALK and ROS1 share considerable homology, which lets crizotinib to bind to both with strong affinity.

The advent of precision medicine in NSCLC has remarkably changed the direction of research and improved clinical outcomes. One of the most significant developments was the identification of specific gene changes that define types of NSCLC. The identification of molecular subtypes with differential response to targeted therapies began with the identification of epidermal growth factor receptor mutated tumors in subsets of non-small cell lung cancer (NSCLC). Emboldened by unprecedented response rates to kinase inhibitors seen in that subset, the oncologic scientists searched for other molecular subsets featuring oncogene addiction.

An early result of this search was the discovery of NSCLC driven by activating rearrangements of the anaplastic lymphoma kinase (ALK) and ROS1. In an amazingly Short period following the recognition of ALK-positive NSCLC, clinicopathologic features, development of targeted inhibitor drugs, mechanisms of therapeutic resistance, and new generations of treatment were identified.

Lung cancer accounts for more than a quarter of all cancer-related morality. Non–small-cell lung cancer (NSCLC) accounts for approximately 85% of all lung malignancies, and > 50% of these patients present with metastatic disease at the time of initial diagnosis. The identification of molecular subtypes of lung cancer with targetable driver mutations has remarkably changed the landscape of treatment.

Only a few years later, crizotinib was the first approved TKI by the US Food and Drug Administration (FDA) for the treatment of advanced NSCLC that has spread to other parts of the body and is caused by a defect in either a gene called ALK or a gene called ROS1.

ALK-rearranged NSCLC comprises 2% to 5% of all NSCLC cases. Compared to patients with pan-wild-type NSCLC (i.e. patients who have NSCLC without a known targetable, driver oncogene such as EGFR or ALK), patients who harbor ALK-activated NSCLC tend to be light or never smokers, younger, male, and at more advanced stage. In aspect of histologically, ALK-rearranged NSCLC patients are more likely to be adenocarcinoma, in particular signet-ring cell type with abundant intracellular mucin.

In NSCLC, the reported frequency of ROS1 rearrangements has ranged from 0.9% to 2%. This fusion is usually in association with younger age, never or light smoking history, and adenocarcinoma histologic subtype.

Sometimes ROS1 rearrangements have been seen in large-cell and squamous cell carcinoma. Venous thromboembolism has been reported at higher rates in this population. There are conflicting data with regard to the frequency of brain metastases, with incidences ranging from 3.2% to 36%.

Another type of mutated NSCLC is MET abnormalities; MET is a tyrosine kinase receptor for hepatocyte growth factor. One of MET abnormalities is MET exon-14-skipping mutations (in 3 percent of lung adenocarcinomas and up to 20 percent of the relatively rare sarcomatoid-histology NSCLC).

●MET exon-14-skipping mutations – The MET exon-14-skipping mutation reduces degradation of the MET protein, causing it to behave as an oncogenic driver. The MET inhibitors are suggested in use in the front-line setting for such patients, rather than immunotherapy and/or chemotherapy. Crizotinib is potent MET inhibitor, in addition to inhibiting ALK and ROS1. It can be used off label in the treatment of MET NSCLC.

Crizotinib was shown to have an acceptable safety profile and also to improve symptom scores and quality of life and. Overall, crizotinib has been shown to provide a valuable first- and second-line treatment option for patients with advanced ALK-positive NSCLC.

Crizotinib is an orally active TKI approved by US-FDA for treatment of locally or advanced non-small cell lung cancer (NSCLC) patients with ALK re-arrangement or ROS-1 re-arrangement. It is a selective inhibitor of ALK and MET. Crizotinib is also effective against ROS1 rearranged NSCLC; ROS1 is 77% homologous to ALK in kinase domain. NSCLC response rates for crizotinib are greater than 60% with a mean progression-free survival of over 7-10 months prior to acquisition of resistance to crizotinib monotherapy. Of all patients with NSCLC, around 4% have ALK variants, and about 1-2% have variants of ROS1 or MET. Patients with ALK variant NSCLC tend to be non-smokers, younger than average and the tumors are adenocarcinomas.

Patients with metastatic NSCLC were historically treated with systemic cytotoxic chemotherapy. An improved understanding of the molecular pathways that drive malignancy in NSCLC, as well as other neoplasms, led to the development of agents that target specific molecular pathways in malignant cells. These medicines will be able to preferentially destroy malignant cells, but will be relatively innocuous to normal cells.

The discovery of oncogenic activation of specific tyrosine kinases in some advanced NSCLC tumors, most remarkably mutations in the epidermal growth factor receptor (EGFR) or rearrangements of the anaplastic lymphoma kinase (ALK) gene or c-ROS oncogene 1 (ROS1) gene, has led to a paradigm shift and the development of specific molecular treatments for patients.

Furthermore, the identification of these patient subtypes has been lead to an ongoing effort to identify biomarkers and treatments that can be prescribed for other subtypes of advanced NSCLC patients.

In NSCLC like other malignancies, matching a specific targeted drug to the identified driver mutation for an individual patient has resulted in significantly improved therapeutic result, often in conjunction with decreased toxicity.

Screening for driver mutations has become an increasingly standard part of the diagnostic work-up for NSCLC, and the information is useful in choosing between standard chemotherapy in the absence of a targetable driver mutation versus upfront targeted therapies, which can led to use of a targeted agent as first-line therapy.

Crizotinib is a targeted drug which is effective and can be used in advanced non-small cell lung cancer (NSCLC) that has spread to other parts of the body and is caused by a defect in either a gene called ALK (anaplastic lymphoma kinase) or a gene called ROS1 as a first line of treatment. Also, Crizotinib can be used off label in the treatment of MET NSCLC.

There is also more information about other types of tyrosine kinase inhibitors which can be used in other kinds of advanced like; Crizotinib, Erlotinib, Gefitinib, and Osimertinib in our list of products and our recent articles.