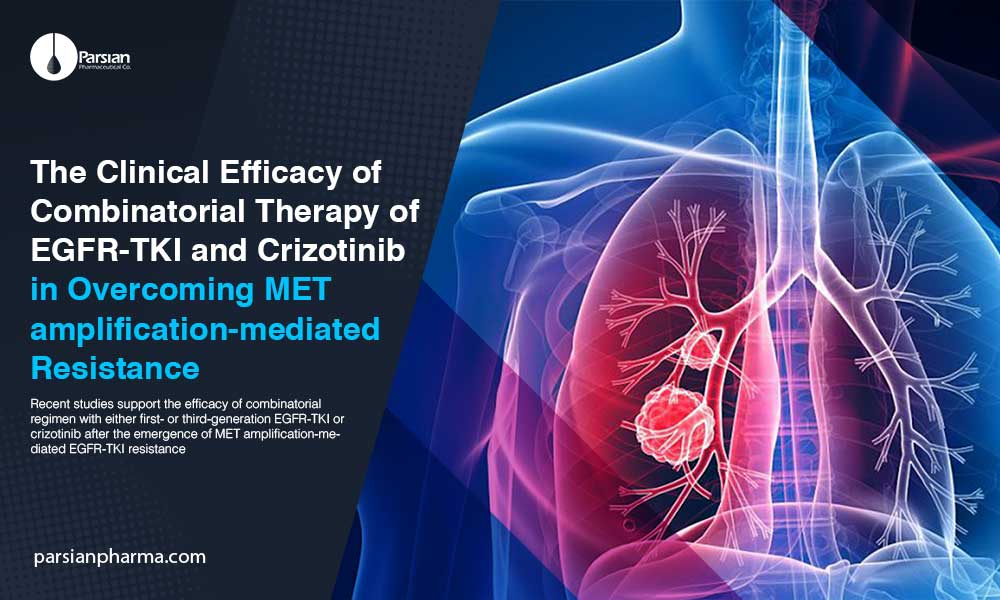 Treatment of non-small cell lung cancer harboring epidermal growth factor receptor activating mutation with EGFR-TKIs has achieved great success, yet faces the development of acquired resistance as the biggest obstacle to long-period disease remission in the clinic. MET or c-MET gene amplification has long been known as an important resistance mechanism to first- or second-generation EGFR-TKIs in addition to the appearance of T790 M mutation. Recent preclinical and clinical studies have suggested that MET amplification and/or protein hyper-activation is likely to be a key mechanism underlying acquired resistance to third-generation EGFR-TKIs such as osimertinib also, especially when it is used as a first-line therapy. EGFR-mutant NSCLCs that have relapsed from first-generation EGFR-TKI treatment and have MET amplification and/or protein hyper-activation should be insensitive to osimertinib monotherapy. Recent studies have support the efficacy of combinatorial regimen with either first- or third-generation EGFR-TKI and crizotinib after the emergence of MET amplification-mediated EGFR-TKI resistance in patients with EGFR-mutant NSCLC.

Lung cancer is the most leading cause of death from death between men and women and accounts for one third of all cancer deaths globally. Non-small cell lung cancer (NSCLC) constitutes over 80% of lung cancer cases and has a low 5-year survival rate of about 18%, despite great efforts made worldwide over the past decades to combat lung cancer. The development of epidermal growth factor receptor (EGFR) tyrosine kinase inhibitors (EGFR-TKIs) based on the discovery of EGFR-activating mutations is an important milestone in the targeted therapy of NSCLC.

Epidermal growth factor receptor (EGFR) mutations are detected in approximately 10–15% of NSCLCs, and exon 19 deletion and exon 21 p.L858R mutations account for 85–90% of the activating variants predicting the response to EGFR-TKIs. Despite good initial efficacy, acquired resistance to EGFR-TKIs unavoidably happens, with disease progression after 10–12 months from treatment initiation in most of the patients. In approximately 60% of the cases, the treatment failure of first- and second-generation EGFR inhibitors occurs due to development of the EGFR mutation p.T790M in exon 20. Third-generation EGFR-TKIs such as osimertinib have been specifically designed to overcome this resistance and maintain on-target capability, despite the presence of the T790M resistance mutation. Nonetheless, disease progression happens within a median of ten months when osimertinib is used as second-line treatment.

Acquired resistance to first-generation EGFR-TKIs is often caused by the acquisition of the T790 M mutation, which accounts for approximately 60% of resistant cases. In addition, MET (c-MET) gene amplification is another important mechanism and is detectable in approximately 5–22% of NSCLC patients with acquired resistance to first-generation EGFR-TKIs. Mechanistically, MET amplification induces EGFR-TKI resistance by activating EGFR-independent phosphorylation of ErbB3 and downstream activation of the PI3K/AKT pathway, providing a bypassing pathway in the presence of an EGFR inhibitor, this redundant activation of ErbB3 lets cells to transmit the same downstream signaling in the presence of EGFR-TKIs. Thus, concomitant inhibition of both EGFR and MET would be needed to overcome resistance to EGFR inhibitors by MET mutation. Although MET amplification can occur with the EGFR T790 M mutation, about 60% of MET amplification is found without T790 M mutation. There is an inverse correlation between the presence of T790 M and MET gene copy number, demonstrating an independent or complementary role of the two mechanisms in the acquisition of resistance.

Osimertinib is an examples of third-generation EGFR-TKIs, which selectively and irreversibly inhibit the common “sensitive” EGFR mutations, Del19 and L858R, and the resistant T790 M mutation while sparing wild-type (WT) EGFR.

Osimertinib is a FDA-approved drug for treating patients with NSCLC that has become resistant to the first-generation EGFR-TKIs through the T790 M mutation and for EGFR mutation-positive advanced NSCLC as a first-line treatment. Although osimertinib has achieved great success in the clinic, patients may eventually develop resistance to the treatment, resulting in treatment failure.

MET amplification leads to bypass the effect of EGFR inhibitors. Thus, to overcome this resistance mechanism, the concomitant inhibition of EGFR and MET is required. Many preclinical studies have confirmed the role of MET amplification in the development of resistance to third-generation EGFR-TKIs, suggesting the use of MET inhibitors, alone or in combination, to overcome this mechanism.

While no significant clinical efficacy has been demonstrated for MET receptor monoclonal antibodies, MET-TKIs have shown encouraging results. Clinical examples have demonstrated effective responses when crizotinib is added to first- or second-generation EGFR inhibitors as well as to osimertinib.

Prospective clinical trials testing the combination of third-generation EGFR inhibitors with MET- or MEK-TKIs in patients that experienced progression under EGFR-TKIs are ongoing.

Recent and ongoing reports provides further evidence of the successful administration of crizotinib in combination with osimertinib to target MET amplification-derived resistance to third-generation EGFR-TKIs in T790M+ advanced NSCLC. Reductions in the starting administration dosage are suggested, but escalation to the full dose is been associated with clinical benefit without significant modifications in tolerability. To our knowledge, the observed survival of 10 years after the initiation of anti-EGFR therapy is the longest that has been reported for this treatment modality so far. The impressive survival time of this patient shows the huge potential for clinical benefit from comprehensive molecular profiling after failure of third-generation EGFR-TKIs to identify and target any genetic mutations causing the acquired resistance, as well as the urgent need for prospective clinical trials discovering new targeted agents and combinations in this setting.

There is also more information related to EGFR, and ALK, and MET inhibitors in our recent articles.

According to the latest data from WHO, among the most common causes of cancer, lung cancer is in the second place (2.21 million cases per year globally) and it is considered as the most common cause of cancer death worldwide(1.80 million deaths per year globally). EGFR, MET, and ALK tyrosine kinase inhibitors (TKIs) are one of the most needed groups of TKIs which are being indicated for treating lung cancer. Parsian pharmaceutical Co. has manufactured these type of medicines for helping lung cancer patients.