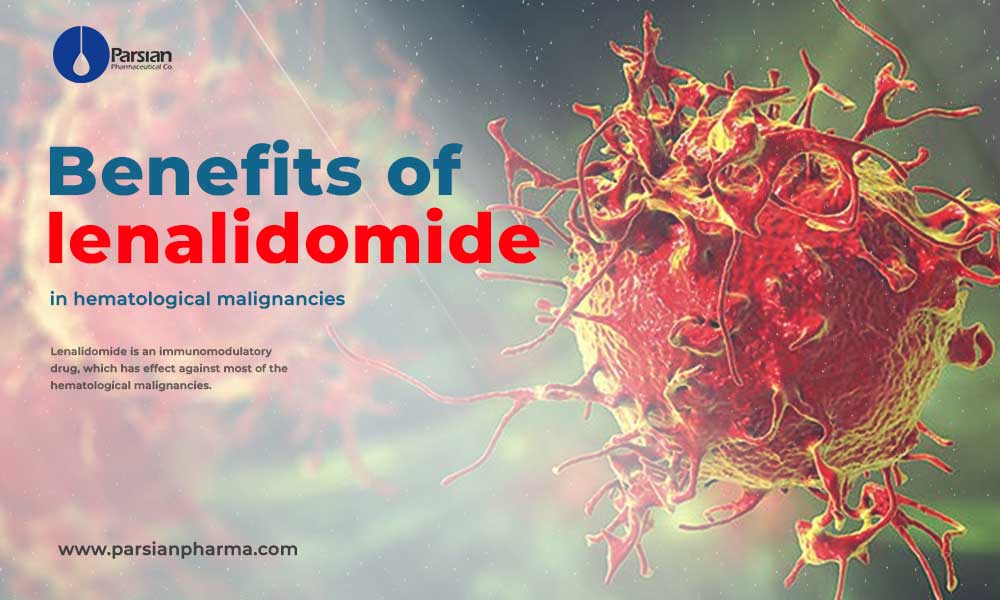 Lenalidomide is an immunomodulatory drug, which has effect against most of the hematological malignancies. Apart from its immunomodulation, it has other properties such as anti-proliferation and anti-angiogenesis. It is not only effective in myeloma and myelodysplastic syndromes, recent studies show its effectiveness on newly diagnosed and relapsed/refractory lymphomas as well. Addition of lenalidomide to standard regimen has lesser central nervous system relapse in diffuse large B-cell lymphomas. It shows promising results in Hodgkin’s lymphomas and leukemias (AML & CLL). Dose escalation may be an option in non-responders with caution in side effects.

Immunomodulatory drugs (IMiDs), which also known as cereblon (CRBN) binding drugs, are therapeutically important anti-inflammatory and anti-cancer medicines. IMiDs are analogs of their prototype compound thalidomide. IMiDs have immune-modulation, anti-angiogenic, anti-inflammatory and anti-proliferative effects. CRBN is a component and substrate receptor of the Cullin 4 Ring E3 Ubiquitin Protein Ligase complex (CRL4). CRL4 consists of DNA damage binding protein 1 (DDB1), RING finger protein (Roc1), and Cullin 4. CRBN binds to its substrate proteins and leads to ubiquitination of these substrates by the CRL4. CRBN has a role in IMiDs-mediated T-cell co-stimulation and cytokine production. CRBN is a primary target of thalidomide teratogenicity. The binding of IMiDs to CRBN is associated with cytotoxicity of IMiDs and can be used for treatment of multiple myeloma (MM), myelodysplastic syndromes (MDS), lymphomas and chronic lymphocytic leukemia. CRBN is composed of an N-terminal ATP-dependent serine protease Lon-like domain, which links to the E3 ubiquitin protein ligase complex CRL4, and a C-terminal domain, which binds IMiDs. Development of effector molecules mediating targeted ubiquitination of disease related proteins through cereblon is a new important way in pharmacology. Development of lenalidomide leads to avoiding thalidomide side effects (neuropathy and sedation), and increasing efficacy. It shares a number of structural and biological properties with thalidomide but is safer and more potent than thalidomide Lenalidomide is 4-amino-glutarimide analog of thalidomide with potent immunomodulatory, antiangiogenic and direct neoplastic cell inhibitory activity.}

Lenalidomide is an immunomodulatory drug (IMiD) and Studies showed that lenalidomide may work through various mechanisms in hematologic malignancies, which involved direct cytotoxicity as well as through indirect effects on tumor immunity etc. It is approved for treatment of multiple myeloma and myelodysplastic syndromes, and proved to have a good efficacy. Recent studies demonstrate that lenalidomide alone produces durable responses with manageable adverse effects in non-Hodgkin’s lymphoma, relapsed/refractory Hodgkin’s lymphoma, chronic lymphocytic leukemia and older patients with acute myeloid leukemia (AML) etc, warranting further investigation of treatment for these patients.

NK cell activation, T-cell proliferation, and decreasing the production of pro-inflammatory cytokines are important effects of lenalidomide. It can promote the Cereblon-dependent degradation of the transcription factors Ikaros (IKZF1) and Aiolos (IKZF3), which are transcriptional repressors of IL-2 expression. De-repression of these factors can lead to increased IL-2 expression, which stimulates T-cells.  Immunomodulation, anti-proliferation, anti-angiogenesis, T-cell and NK activation are important effects of lenalidomide, thereby exerts its action on various hematological malignancies such as MDS, myeloma, and chronic lymphocytic leukemia (CLL). Thrombotic adverse effects and cytopenias are the important side effects regarding lenalidomide, which are acceptable comparing to the benefit. 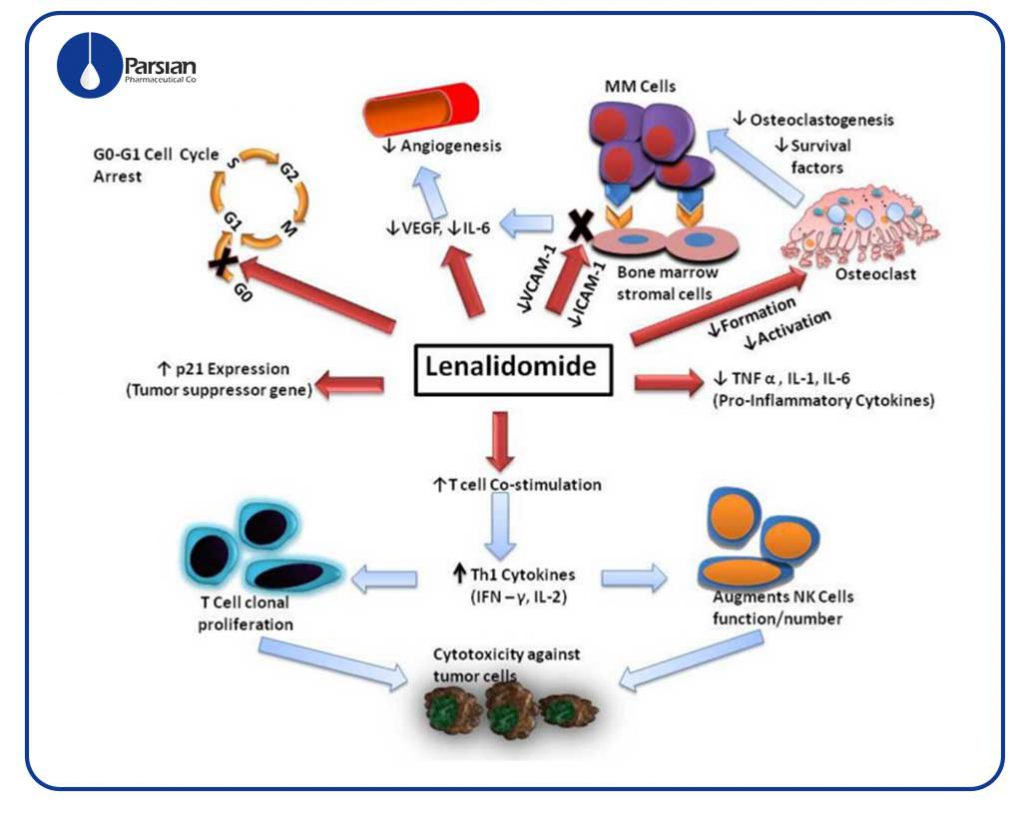 Even though various mechanisms have been proposed to explain its efficacy, as a single agent or in combination, in hematological malignancies, the exact molecular and cellular targets of lenalidomide are not very well defined. Its efficacy can be a result of its effects on the angiogenesis, immune system, and signal transduction or a combination of all of these. Figure 1 summarizes the mechanism of action of lenalidomide as we know so far. Future studies may uncover newer targets and lead to efforts to enhance the efficacy of this interesting new products, may also lead to development of newer IMiDs that can target specific mechanisms of action more potently, to further enhance their clinical efficacy and may provide an important biologic rationale to combine therapies with distinct, yet well-defined site of action.

Myeloma and Other Plasma Cell Disorders

Lenalidomide plus dexamethasone (Rd) is a backbone of most myeloma regimen therapies, and showed slight increase in survival benefit compared to melphalan-prednisone-thalidomide therapy in transplant ineligible myeloma patients with less neurological and hematological adverse effects. In general, different regimens containing lenalidomide can be used for treating myeloma. It is also effective in plasma cell leukemias (PCL) and Waldenström’s macroglobulinemia (WM). Because of decreased occurrence of these conditions (WM, PCL), most of the available information are based case studies and reports.

Among 18 patients with Maltoma treated with lenalidomide, ORR was 61%. In combination with Rituximab resulted in higher ORR and CR. Late-onset remissions is one of the phenomena with the use of IMiDs in MALT lymphoma. Sufficient time needed to assess the response and to avoid unnecessary over treatment. Recent studies show clinical activity in T-cell lymphomas (TCL) as well.

Plasmablastic lymphoma (PL) is CD20-negative aggressive B-cell lymphoma, which requires aggressive chemotherapy regimens followed by autologous stem cell transplant. However, other options should be explored for transplant ineligible patients. Lenalidomide induces remission in PL. Post-transplant lymphoproliferative disorders (PTLD) are new entry in the hematological malignancies. Due to improved medical information, organ transplants are increasing around the world; it is also increase in PTLD. Only few case reports are available regarding the use of it in PTLD. Lenalidomide provides better response in both B-cell and T-cell PTLD.

Lenalidomide is not only effective in MDS and Myeloma; it shows action on lymphomas as well. Lenalidomide-based regimens such as R2-CHOP and R2 regimens may replace other aggressive chemotherapy regimens in the treatment of lymphomas. Even though the efficacy of it in Rel/Ref Hodgkin’s lymphoma and TCL is less compared to efficacy in B-cell non-HL, it will help small subset of patients with these conditions. Lenalidomide is a better alternative to other aggressive chemotherapy regimens especially in elderly patients with poor performance status. There is a need for more studies in CLL and AML, as only smaller proportion of patients responds to lenalidomide alone or in combination with other drugs. Due to decreased incidence of PTLD and PL, efficacy of it on these diseases requires further studies. Dose escalation may be an option in non-responders of some hematological malignancies. Immunotherapy era has changed most of the therapeutically regimens for hematological malignancies.

You can obtain more information regard lenalidomide in our list of products. Also there is more information about the other anti-cancer medicines used in treating the other type of hematological malignancies, in our recent articles: highlights